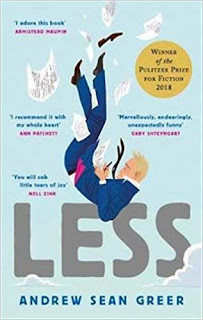 Another novel about a white man with problems? Think again


The cover of Andrew Sean Greer’s Pulitzer prize winning novel Less includes a suited man in free fall surrounded by loose pages of a manuscript. It’s a desperate scene conjuring images of the financial crash, of heroes falling from their lofty podiums and of celebrities exposed as frauds but is this just another novel about a white man with problems?

Less is part travelogue and part literary fiction concerning protagonist Arthur Less. Less is an erudite but second-rate writer who comes out of a long relationship with a celebrated poet and decides to travel as a means to work out what to do next with his life. Accepting invitations to literary festivals across the globe Less builds an itinerary of self-discovery knowingly designed to suit a gay man approaching the unknown territory of 50 years of age.

The novel is structured by the destinations on Less's global events calendar including France, Morocco, India and Japan to name a few. At each stop Less comes to terms with another anxiety whilst he plays out his journey of self-reflection. Yes, he’s self-obsessed and yes he’s self-serving but just when the story is about to descend into another middle aged white guy wallowing in his problems Andrew Sean Greer injects sharp wit and self-deprecating humour to make this as much an ode to middle aged masculinity as it is a modern gay self-help book.

In a particularly meta moment Less reflects on the glory of winning the Pultizer, ‘Pull it sir’, prize which Andrew Sean Greer went on to win for his own novel. Less himself would no doubt have approved.

Arthur Less is a brilliant every-gay-man for a new generation who not only want to read the novel but want to follow his travels on Instagram.