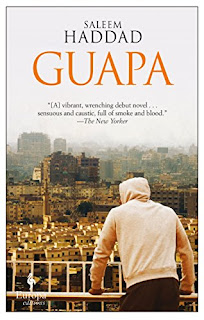 "There is an art to misinterpreting. It needs to be done subtly so that it doesn't cause chaos, but just enough to leave a lingering sense of confusion"

I came across this debut novel from Saleem Haddad in WHSmith's new writers section and after starting it straight away on the train I was immediately hooked. I don't think I've read another book about a young gay guy living in the Middle East.

Guapa tells the story of a young guy, Rasa, living in an unnamed Arabic city in and around the time of the Arab Spring. The story is told in a single impassioned day in which Rasa's life unravels in a whirlwind of potential shame and disgrace or eib. Rasa lives in an apartment with his grandmother who he manages to conceal his relationship with boyfriend Taymour from until she spies them through a key hole. This is the central narrative hook the plot hangs off but the story is so much more.

Rasa is completely disillusioned by life in the Middle East but also by Western culture which is vividly explained in a flash back to his time studying in the US around the time of the 9/11 attacks which left his identity as more threat than exotic; "America is like a fisherman's hook that can catch you and either cut you up and eat you, or if you are not to its taste, toss you back in the water with a hook shaped hole in your cheek". Back at home Haddad brilliantly uses Rasa's job as a translator as a metaphor for the internal dilemma he faces making sense of the World.

Guapa itself is an underground gay bar which the city's LGBT community use as a base and sanctuary. The story could easily portray this alternative reality as a cliche but Haddad's portrayal is raw and authentic but never over the top. Haddad writes the character of Rasa's friend Majid, a celebrated local drag queen, perfectly. Narratively Guapa needs Majid as a counter balance to the relationship between Rasa and Taymour.

I left this novel wanting to read more. I thoroughly trusted Saleem Haddad as a writer and for opening my eyes to so much within the limits of a highly readable novel. This novel is part political, part religious but entirely human and I can't wait to read more but this exciting author.

Record of a Night too Brief by Hiromi Kawakami 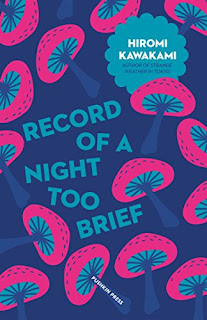 "The nightingale sang again. The plates on the table gleamed, and the food, in all its ceaseless variety, breathed glossy and bright. The night had only just begun"


I couldn't miss the opportunity to hear Hiromi Kawakami speak when she was in London recently and, thanks to Foyles on Charing Cross Road, I got the chance to attend a brilliant Q&A session and book signing. The main topic was Kawakami's celebrated recent novels (previously reviewed on this blog) Strange Weather in Tokyo and The Nagano Thrift Shop but we also got to learn more about the so far untranslated work that might one day make it into English.

Hiromi Kawakami occupies a unique position alongside other contemporary Japanese women writers. Her work is characterised by strong female leads who are often at odds with mainstream society in some way. Kawakami's writing is intimate and personal but in A Record of a Night too Brief we find a more whimsical and ephemeral style.

A Record of a Night too Brief is a collection of three novellas which are stylistically though not narratively linked. For me the strongest of the novellas is the eponymous A Record of a Night Too Brief about a woman who travels through a dreamlike world of never-ending night with her porcelain girlfriend (yes that's right). This is a story of extraordinary love, loss and matter-of-fact tragedy; "The girl was already showing signs of no longer being a girl.. the ends of her arms and legs had begun to divide into branches; her hair had fallen out".  The pithy chapter titles 'Lion' and 'Apoptosis' are the only breaks in this endlessly surreal nightmare. At times the story reminded me of Studio Ghibli's Spirited Away; a young girl unknowingly enters a magical parallel world inhabited by animals and silent masked creatures.

Anyone new to Kawakami would be better to start with the more conventional novels before moving to these less complete but enjoyable fables but it is brilliant that Pushkin Press have packaged them in this way. The cover artwork by Nathan Burton Design is instantly covetable and I'm pretty pleased to have a signed copy on my bookshelf!


Record of a Night Too Brief by Hiromi Kawakami published by Pushkin Press, 160 pages. 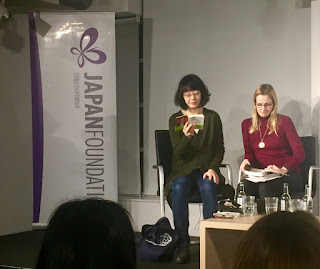