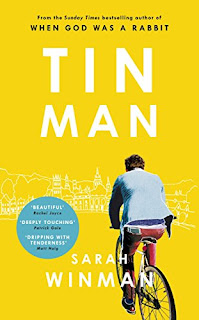 In the opening chapter of Sarah Winman's new novel Tin Man we meet Dora who determinedly defies her husband by displaying a print of Van Gogh's Sunflowers, that she won in a raffle, on the kitchen wall. Dora's print is a window to another world, another life beyond the drab 1950s kitchen wall in their house in the shadow of the Cowley motor works on the outskirts of Oxford. Though the story that follows is her son Ellis's, in many ways Tin Man is defined by the hopes and unfulfilled dreams of his mother Dora.

Tin Man is a love story in two parts, each told from the different perspectives of the two main characters Ellis and Michael. Ellis's story tells of lost love and unrealised creative potential whilst Michael's fills in the gaps and explores their relationship over the years in more detail. The stories intertwine and overlap, at times the pair become a trio when Ellis marries his girlfriend Annie but at others they are separated and absent from each other's lives.

The most powerful part of the novel for me concerns the time the pair spend, like Van Gogh himself, in the South of France with the sun on their backs and the sounds of Francois Hardy in their ears. Seeds were planted early in the novel on the banks of the Thames at home in Oxford that come to bloom under the yellow sun of Provence, its a beautifully written sequence. "We'll be OK, I remember thinking. Whatever we are, we'll be OK".

Though the novel is short the narrative arc moves right through to the 1980s with Michael facing the loss of those around him in the height of the AIDS crisis, Winman writes with such empathy that you feel these characters implicitly. The emotional intensity created in such a bite sized novel reminded me of Ian McEwan's On Chesil Beach. Though sad in parts the story is deeply touching and authentic.

I read this novel in two sittings over the bank holiday weekend. 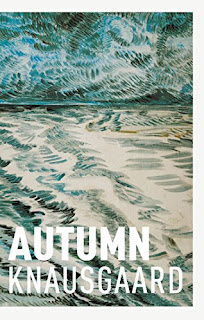 "Nearly all my dreams are set in landscapes I moved away from long ago, as if I had left something behind there that was never concluded"

Autumn is the first of four seasonal books making up an encyclopaedia, of sorts, that Knausgaard has written in order to make sense of the World for his unborn daughter. In places the book takes the form of letters directly to his daughter whilst in others the book comprises short musings on topics as varied as Vomit, The Migration of Birds and Oil Tankers.

Although this project is about the big things that Knausgaard wants to prepare his daughter for its also a fascinating glimpse into the way he himself sees the World. Knausgaard has bared his soul already in the deeply personal My Struggle series in which he blends memoir and literature in a way that feels authentic and visceral. In Autumn, he's essentially continuing the theme presenting little nuggets of insight into his life and into Norwegian culture.

Some of the chapters deal with the everyday like oil tankers and plastic bags but even with the most mundane of subjects Knausgaard's writing is lyrical and never prosaic; "The plastic bag has something inviolable about it, it seems to exist in a place beyond everything else, including time and its inexorable modality".

Autumn is a book for readers familiar with Knausgaard's style and character. Without having read at least part of the My Stuggle series you might possibly be left wondering what all the fuss is about (a totally Knausgaardian sentiment). Yes the chapters in Autumn lack a narrative or an a over-arching theme but the prose remains consistently original; "Nearly all my dreams are set in landscapes I moved away from long ago, as if I had left something behind there that was never concluded.

Hats off to Karl Ove Knausgaard for attempting such as bold endeavour as to curate his own encyclopaedia!

I read this novel on Kindle on the Tube between meetings.


Autumn by Karl One Knausgaard published by Vintage, 188 pages.

The Man Who Died by Antti Tuomainen blog tour 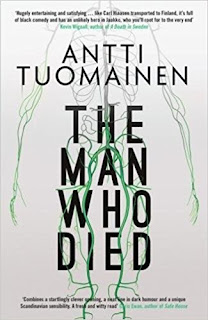 "If you had only a day left, what would you do? And what if you had a week? A month"

Antti Tuomainen has an instinct for compelling story even in the case of his newest book in English The Man Who Died which, on the face of it, is a detour from his usual chilling Finnish crime thrillers.  Thank you Orenda Books for the review copy and for having me on the launch blog tour.

The Man Who Died begins with a unique premise. Successful mushroom farmer and business man Jaakko Kaunismaa is told by his doctor that he is terminally ill. Jaakko, it seems, is dying slowly from long term exposure to deadly poisonous toxins. So begins a journey on which he must come to terms with his own imminent mortality at the same time as investigating who it is who wants him dead. With his business cultivating specialist, and highly prized, mushrooms for the Japanese market could there be industrial espionage at play? Or should Jaakko look closer to home, in The Man Who Died anything can happen.

Jaakko's attitude to his terminal illness is really interesting; rather than wallowing in self pity he writes of list of all the things he wants to do with his time left on Earth; "The good thing about death is that as it draws closer many things I used to think were important lost their significance". This 'To Do List' provides the resilience he needs to tackle the issues thrown his way as he starts to investigate more into his business, his wife and his suppliers. Thanks to Jaakko I now know a lot more about the Finnish mushroom industry!

But that's not all. Through Tuomainen's writing I know a whole lot more about Finland itself. To call The Man Who Died a black comedy probably doesn't go far enough to explain quite how surreally funny this book is. The scene in which Jakkoo fights a man to the death in a sauna is a uniquely Finnish blend of humour and gore. With much of the Nordic Noir genre being light on laughs The Man Who Died provides some light relief.

Crime and mystery fans will enjoy this novel but for me its the insight into Antti Tuomainen's Finland which is most rewarding. In short this is delightfully genre blending caper about a man with only months left to live. "Death felt at its most unreal in the mornings", Jaakko muses in typical irreverent style before simply getting on with his day with new found urgency. You have to admire a man with a 'To Do List'.


The Man Who Died by Antti Tuomainen (translated by David Hackston), published by Orenda Books, 300 pages. 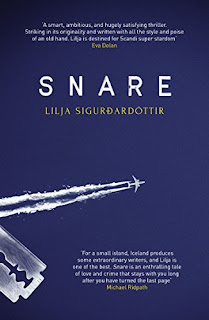 Lilja Sigurdardottir literally pulls you into Snare from the opening chapter and, believe me, you'll struggle to put this book down.

Snare is a slice of cool Nordic Noir about a woman, Sonia, caught in a trap as a drugs smuggler into Keflavik airport whilst fighting her ex over custody of their son. Sonia's resourcefulness to make ends meet in such a high stakes environment creates a tension that Sigurdardottir exploits to brilliant effect throughout the novel as the narrative steams ahead with the pace of Sonia's fast paced moves to evade capture.

The Iceland in Snare remains in the grip of the banking crisis which brought the island to its knees in 2010. The country remains deeply suspicious as the Government, and the media, continue to round up those involved in the financial deals which led to the collapse of the economy; "The weathered black stone of the Parliament building made it look more like a prison than the cradle of democracy".To complicate matters further Sonia ends up in a passionate relationship with Agla, one of the cold and apathetic executives involved in the investigations.

As the grey ash from the Eyjafjallajokull volcanic eruption relentlessly settles on the streets of Reykjavik so too does the white powder that Sonia continues to bring in to Iceland despite the ongoing suspicion of Bragi a senior customs officer at Keflavik. As the plot develops the snare tightens to the point where Sonia faces her most audacious job yet smuggling a quantity of cocaine into Iceland from London.

Snare is an exceptionally good thriller translated into a pacy and urgent English language, by Quentin Bates, that is edge of the seat stuff. I immediately warmed to Sonia who does what she needs to in order to provide for Thomas in spite of her difficult and complex relationship with his father and equally difficult relationship with Agla who can't come to terms with her professional reputation and her visceral feelings for another woman. But its customs official Bragi who offers up the greatest surprise in the end.

Lilja Sigurdardottir we need more, Quentin Bates you're going to be busy.

I read this novel in paperback mostly over a weekend at home in Oxfordshire. Read more reviews of Icelandic literature here; Ragnar Jonasson Jon Kalman Steffanson