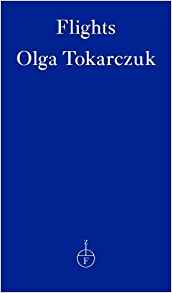 Like insatiable wanderlust you'll feel lost when its over

Olga Tokarczuk's Man Booker International 2018 winning novel Flights could be the most original novel you read this year. Part collection of short stories and part essay on the theme of travel psychology, Tokarczuk takes us on a life affirming examination of the role of time and place.

Tokarczuk is one of Poland's most renowned writers having already scooped the country's most highly prized accolade for Flights when first published in 2009. Translation duties into English fall to the capable hands of Jennifer Croft who elegantly manages to make sense of Tokarczuk's boundless prose.

In Flights Tokarczuk takes us on a multi-narrative journey from a story concerning Chopin's preserved heart traveling from Paris to Warsaw, to a tourist who goes missing on a Croatian island via a former whaler who high-jacks his own ferry. Tales are disjointed and interspersed with short essays concerning the minutiae of travel yet the book as a whole hangs together in addictive symphony.

For the seasoned traveler, the committed nomad or the reluctant holiday maker Flights offers a world of discourse in which to literally immerse yourself. In the tradition of the essay novel there are parts that will resonate greater than others but, like like insatiable wander lust, you'll feel lost when its over. 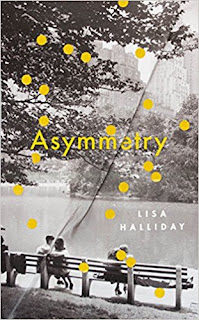 Alice's curiosity peaks as she continues down her own rabbit hole

Lisa Halliday's debut novel Asymmetry has divided opinion; just look at the divergent commentary from The New York Times to reader reviews on Amazon. On the one hand, champions of character based literary fiction argue that the novel is an intelligent work worthy of endorsement by the late Philip Roth. On the other hand there are those readers who find Asymmetry a loosely plotted and confusing collection of three disjointed novellas. The publishers are, no doubt, relishing the conversation; isn't that the point of great fiction?

In the first part of the novel 'Folly' a young editor in New York, named Alice, meets and falls for a celebrated older writer, Ezra Blazer. Halliday's characterisation is completely convincing, in fact much has been written about her own relationship some years ago with Philip Roth. Alice's curiosity peaks as she continues down her own rabbit hole with the older writer.

In 'Madness', the second part of the novel, we meet economist Amar who is being interviewed by immigration officers at Heathrow Airport whilst on his way to Kurdistan to see his brother. Despite the odd recurring motif there is little to connect this story with 'Folly'either contextually or stylistically, or is there?

Finally, in the third part of the novel we find a brilliantly well crafted transcript of an episode of BBC Radio 4's Desert Island Discs featuring Ezra Blazer himself speaking about his life through a hypothetical playlist.

The problem with Asymmetry is that Halliday keeps us waiting right until the very end before even the merest hint that these stories are connected. Chances are that many readers will have abandoned ship before the reveal; a simple case of too little too late. Halliday is certainly an accomplished writer but the concept of Asymmetry is just too clever for its own good. Somewhere in the text there is a brilliant story about Alice and Ezra Blazer that still needs to be fully developed.

Death in Spring by Merce Rodoreda 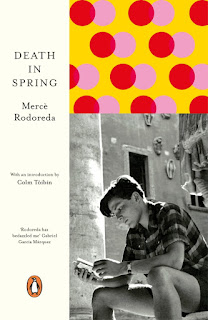 Rich with motifs and symbols intensified by years in exile

Penguin's new reissue of Merce Rodereda's 1986 novel Death in Spring includes a beautifully crafted introduction from Colm Toibin who praises both Rodereda's prose style and her adept storytelling. Rodoreda is regarded as the most important Catalan writer of the post war period and with this reissue is destined to be discovered by a new generation of readers.

Death in Spring is a later work when Merce Rodoreda, having spent much of her life in France and Switzerland in exile, looks back on the Catalonia of her youth. The prose is rich with motifs and symbols as if intensified to the hyper-real by her years in exile. Colours, as depicted in the cover art, are vivid and deep from the pink of the paint applied annually to houses in the villages to the crimson stains of death in the community.

The story concerns a 14 year old boy who grows up experiencing the bizarre customs of a small Catalonian town. The most profound traditions include the ritualistic burial of the dead in tree trunks which Rodereda's protagonist experiences at first hand when his own father dies. These disturbing scenes are played out against more comforting observations as the seasons change and the flood waters rise and fall.

Death in Spring is brutal, harsh and steeped in a sense of the Catalan experience during and after the Spanish civil war.  Rodereda's acclaim is surely in part down to her ability to articulate the social reality of a life on the wrong side of the political mainstream.

Death in Spring by Merce Rodereda and translated by Martha Tennant published by Penguin, 150 pages 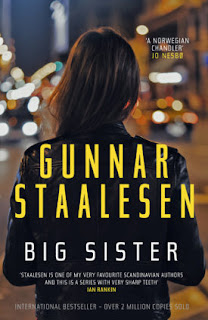 Exactly why we love Nordic Noir

Gunnar Staalesen's 20th outing for private eye Varg Veum reminds us exactly why readers the World over love the Nordic Noir genre. Staalesen has been producing hard-boiled crime fiction since the Seventies and is the undisputed master of character based Nordic Noir thanks to his stories set against the relentlessly rain-drenched streets of Bergen, Norway.

In Big Sister an older and more seasoned Veum faces a missing person investigation with a deeply personal connection. His client this time round is searching for her 19 year old god-daughter who has gone missing from her flat share with two other trainee nurses. This is usual Varg Veum territory but this time the client is his own estranged half-sister.

As Veum investigates he follows leads deep into the dark web and into a gang of extreme bikers discovering cover ups and hidden secrets at every turn. The narrative never slows with Staalesen keeping the reveals coming thick and fast. Staaleson's Veum is accessible, reliable and intuitively inquisitive.

With the police unwilling to get involved so early in the disappearance its Veum who follows his instinct rather than police procedure which makes for much more human fiction. Searching for the truth has universal appeal and Gunnar Staaleson knows exactly how to lead us towards a startling climax. Credit also to Don Bartlett for bringing the story to life in English.

If you ever find yourself in Bergen don't miss the proud memorial to her most loved PI. His unassuming statue can be found in a suitably shadowy doorway close to the fish market.

Thank you Orenda for the review copy 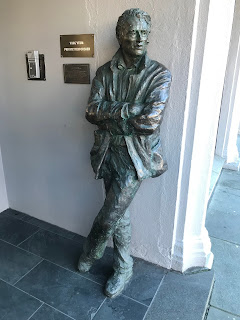