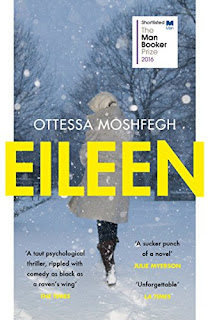 "Some families are so sick, so twisted, the only way out is for someone to die"

Eileen is a dark and dreary character study of a young woman told in flash back, some fifty years later, by an older Eileen. Otessa Moshfegh's novel is no barrel of laughs but don't let that put you off. This Man Booker 2016 nominated title is so well written that, in spite of the the depressing subject matter you may just be moved by the beautiful prose.

The world that Eileen inhabits, in the flash backs to the 1960s, is a quiet town outside Boston in which she works as a secretary at a young offenders institute. Eileen lives with her alcoholic father in a decrepit house; "The gin reeking through his skin and on his breath obliterated all other smells around him". She has no friends, no ambition and no life to speak of. Eileen barely exists for the first two thirds of the novel as Moshfegh slowly builds the character so vividly and richly; "What I mean to say is that I was not fundamentally unattractive. I was just invisible".

Eileen doesn't so much dream, "A grown woman is like a Coyote - she can get by on very little" but her World is shaken with the arrival of a new colleague at work, Rebecca. There is a deep and colourful chasm between the two women, Rebecca is everything that Eileen isn't, yet they form a friendship of sorts which opens Eileen's senses to a different life.

With new self awareness, in the final parts of the novel, Eileen joins forces with Rebecca in a dramatic final twist. Some readers will find the build up to the these final scenes too unbearable but for me I was happily lost in the bleak back story.

Eileen is a slow moving, character driven slice of literary fiction that is probably mis-sold as a thriller. The flash back's from a mature Eileen complete the narrative with as little hope as it began; "Idealism without consequence is the pathetic dream of every spoiled brat"

I read this novel on Kindle, mostly on the train in and out of Marylebone

Eileen by Ottessa Moshfegh, published by Vintage, 274 pages
at November 06, 2016 No comments: Links to this post 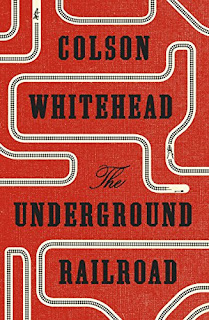 "Slavery was a sin when whites were put to the yoke, but not the African. All men are created equal, unless we decide you are not a man "

The Underground Railroad reached a special kind of celebrity publishing status the moment it was championed by heavy-weight influencers Oprah Winfrey and Barrack Obama. An inevitable phenomenon was born but is Colson Whitehead's novel actually any good? I was lucky enough to receive a free review copy from our friends at Netgalley, thank you guys!

The year is 1812 and the novel follows Cora a young girl who escapes a life of brutal slavery at the Randall Cotton Plantation in Georgia by joining the underground Railroad. In this novel Whitehead imagines the underground railroad as exactly that, a secret railway built to transport runaways to free states such as Canada. This is a clever fictional conceit that builds on the real life underground railroad which was more like a network of safe houses and sympathetic fixers who were happy to flout the law by hiding slaves and misleading the slave catchers.

The novel is essentially a chase as Cora flees ever further from the plantation being closely followed by a renowned and feared slave catcher. Whitehead's narrative pace captures the fear of the hunted Cora as she pushes deeper into the unknown. The fact that she has nothing to lose is no comfort as she is subjected to increasingly brutal challenges.

At its best Colson Whitehead's novel is a stark reminder of an intrinsic narrative that runs through the American Psychology; "And America, too, is a delusion, the grandest one of all.... this nation shouldn't exist, if there is any justice in the world, for its foundations are murder, theft, and cruelty." But at times, unfortunately a most times, the novel maintains too much distance. As a reader I found is hard to empathise with Cora. Yes I felt the brutality of her childhood and the loneliness of being a fugitive and yet I know little about Cora as a teenage girl in the most exceptional of circumstances.

This novel works, really works, in terms of shining a light on a most difficult part of history but is ultimately unsuccessful in conveying the human stories that really created the Underground Railroad. And therein lies the irony, Whitehead fictionalises the Railroad itself but at the expense of the characters.

I read this novel on Kindle, mostly on the train in and out of Marylebone

The Underground Railroad by Colson Whitehead, published by Fleet, 320 pages