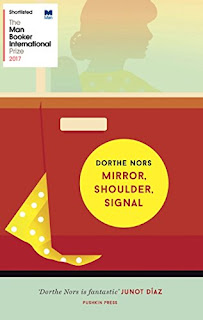 Early on in Dorthe Nors's Man Booker International Prize shortlisted novel Mirror, Shoulder, Signal we meet Sonja, a forty something woman taking driving lessons at home in Copenhagen. Sonja has a good grasp of the basics behind the wheel and yet seems permanently stuck in the wrong gear but is it competence or fear that's really holding Sonja back?

I'd been meaning to pick this book up since I first read the Man Booker International 2017 shortlist but it wasn't until a surreptitious visit to the library last week that I actually got my hands on the book.  Its a thin novel, only 139 pages, which in my world means I start straight away.

Misha Hoekstra's translation seems natural and I'm quickly immersed in the fantastic characters Nors creates from the instructors at the driving school to Sonja's sage like masseuse who add depth and dimension to this lyrical story about a woman who can't move forward in life. Sonja's circumstances will resonate with audiences everywhere but the interplay between her urban life in Copenhagen and her family in provincial Jutland is particularly Danish; "..its tricky making yourself invisible in a world that's as flat as a pancake".

What's so clever in Mirror, Shoulder, Signal is the amount of story Nors packs into so few pages. Sonja goes on a real journey through the novel but the way Nors reduces this to the simple conflict around changing gears in a driving lesson is a masterclass in precision writing. Mirror, Shoulder, Signal, deserves a place in the Danish Design Centre alongside Arne Jacobson's minimal yet elegant Egg Chair.

Great job (again) Pushkin Press for publishing new and innovative writing from around the world and  thank you (again) Oxfordshire Libraries for your well endowed stacks! 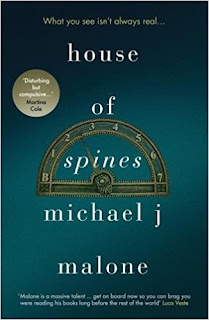 "It occurred to him that each book top was like the knuckle of a vertebrae. He sat up, head reeling. He could see bones everywhere. He was living in a house of spines."


A few chapters in to Michael J Malone's new book House of Spines and I'm wondering; can Malone really pull off a gothic horror story set in contemporary Glasgow? The set up is interesting, down on his luck writer Ranald learns, out of the blue, that he has inherited a country house from an unknown Uncle who has specifically called for the house, and its well endowed library, to be handed to his nephew upon his death.

As unlikely as this twist of fate seems Ranald is soon in a cab heading over to the estate where he'll meet his Uncle's lawyer and the housekeeper who manages the house with her husband. Its a classic 'Why me?' moment for Ran but is there anything in his late mother's behaviour that might of hinted at her wealthy family roots? He has nothing else to do so may as well investigate.

House of Spines contains all the classic gothic horror tropes from kooky house keepers to broken lifts and eerie sounds coming from the walls. When a mysterious cousin turns up to contest the will you know you're in safe hands with Malone who evidently has a clear talent for storytelling. Malone delivers a page turner that is (thematically at least) the love child of Daphne Du Maurier's My Cousin Rachel and Stephen King's The Shining.

Ran is a believable character whose ability to both trust and challenge those around him makes him convincing and real. When his world turns upside down we empathise with him and root for the truth to emerge from his twisted family history; "I'm pretty certain that every generation of your family has had its victims, Ran. You need to break that cycle and get the hell out of here. Before its too late."

The plot comes thick and fast with Ran emerging from the house occasionally to visit the cafe in the village which Malone uses effectively as a means for Ran to learn more about his family's history from the villagers. The more he immerses himself into life in the house the more he learns about is Uncle Alexander, about his own Mother and about the tragic event that defined his Uncle's life.

So can Michael J Malone pull off a gothic horror story in contemporary Glasgow? Yes, House of Spines is a top class read that's as hard to put down as the best in the genre.