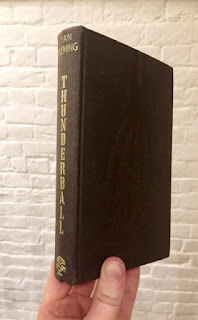 "These rare men are apt to possess three basic attributes - their physical appearence is extraordinary, they have a quality of relaxation, of inner certainty, and they exude a powerful animal magnetism "


What to say about Ian Fleming's Thunderball? Just another 007 thriller heavy on international travel, super villains and glamorous women? Of course Thunderball contains all the classic Bond ingredients but the reason I'm reviewing the novel this week is due to a first edition copy I was gifted for Valentines' Day - not bad!

My copy is from the original 50 thousand first printed in hard-back by Jonathan Cape in March 1961 and sold for 15 shillings (about £20 in today's money). The novel quickly sold out and whilst my copy is missing the original dust jacket it is in remarkable condition.

As I opened the first page I thought about who first bought this copy back in the sixties. As the ninth book in the Bond series the original owner could well have been a 007 fan already but no doubt the forthcoming release of the first Sean Connery film adaptation, Dr No (released in 1962) would have been hotly anticipated by readers at this stage. Whatever the reason splashing out on a hard-back copy would have been quite an indulgence.

I'm pretty sure that it didn't disappoint. The story is set mostly in the Bahamas with Bond dispatched to track down two nuclear bombs stolen by new international syndicate SPECTRE. Fleming writes some pretty violent passages at times, the scene in which pilot Petacchi is murdered by a stiletto through the roof of the mouth and into the brain is described as 'a sear of pain, and an explosion of brilliant light'.

James Bond's attitude to women remains one of the most 'period' aspects of the book. In one scene Fleming admits that 'women are often meticulous and safe drivers, but they are very seldom first-class' before realising the danger for Bond as 'this girl drives like a man'.

Interestingly Thunderball was the first Bond novel adapted from a screenplay (Fleming had previously worked on the screenplay Longitude 78 West) which suggests how important Fleming's cinematic aspirations had become at this stage. The novel was written in Flemings Caribbean home Goldeneye and was so well received that it has been adapted twice for the cinema as well as for a radio play and a comic strip.

I read this novel in hardback on the train into Marylebone 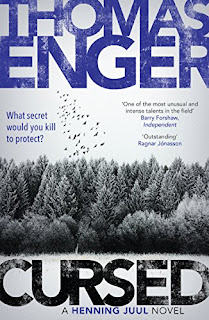 I'm so pleased to be included in the Cursed blog tour this week, thank you Orenda Books for the review copy! This is my first Thomas Enger novel and my first introduction to his protagonist Henning Juul; Norwegian journalist and rising Nordic Noir star.

"What secret would you kill to protect?" asks the cover which sets this novel up really well. The refreshing thing for me was that Cursed is less police procedural and more character driven. The plot drives forward at pace thanks to the casting of journalists, Henning and Nora, rather than police detectives. Their deadline driven form of investigation is a great technique Enger uses to keep readers on the edge of their seat.

Henning and Nora have history having been in a relationship together that ended in the death of their child. This grief, "a virus you can never quite kick, not completely" both binds them together and drives them apart creating a unique aspect to their partnership. The scenes with Iver, Nora's new boyfriend are especially well written; "Henning saw discomfort in Iver's eyes; they told of stories that he didn't want to hear".

At times Enger's fast pace compromises the writing which can be curt and pithy - I'm a sucker for more elegant prose! That said, this is crime filled page turner that doesn't disappoint. 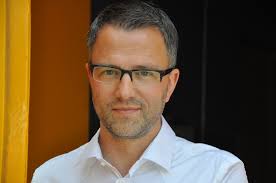 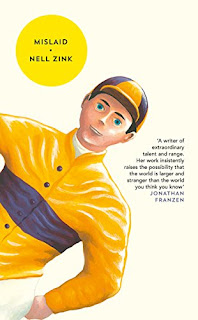 "When he met Peggy, he'd thought his homosexuality might be a great big cosmic typo"

I picked up  copy of Mislaid at the library at home in Thame a few weekend's back. I hadn't gone in looking for anything in particular but I was seduced by this cute cover and the fact that I'd enjoyed Nell Zink's other novel; The Wallcreeper. Truth be told I'd suggested in my review of The Wallcreeper that I'd be rushing out to pick up a copy of Mislaid straight way so I'm sorry for the delay!

Mislaid begins with a really interesting set up. Lee Fleming is a celebrated gay writer who retreats to a cushy academic role at a small college for women in Virginia where he teaches with minimum effort and fails to pick up a pen again. Nell Zink expertly writes these troubled and idiosyncratic characters and perfectly captures Lee's upper middle class condescension; "He envied straight men's lives of duty and gaiety, their world bounded by pregnancy and the clap".

Zink's portrays the college as a back-water second, or third, tier institution more well known for lesbianism than anything else yet it is here that Lee uncharacteristically starts a relationship, and ultimately marries, Peggy a student and wannabe play-write; "The existential angst served to mask her fear of Lee". This first part of the story brilliant charts the relationship and the awkward response from Lee's landed Virginia family. I'm a real fan of these campus set stories and Mislaid really delivers in the early chapters.

The story soon flips to Lee and Peggy's grown up children Byrd and Mireille who essentially live out the anxieties and fears of their parents in a similarly contained academic microcosm. Bryd is the handsome Ivy league sports hero struggling with his gay father and Mireille is a young girl who more comfortable recognises herself as African American. Zink always avoids the ordinary.

In any case Nell Zink is hugely comfortable writing dysfunctional family drama. The trouble is that the story doesn't really build on the great beginning. All the characters are literally thrown up into the area and don't really ever land again. For me this is forgivable as, narrative short-comings aside, Zink's characterisation is brilliant and I prefer my fiction slightly left-field.

3 of the best: Contemporary Japanese Fiction 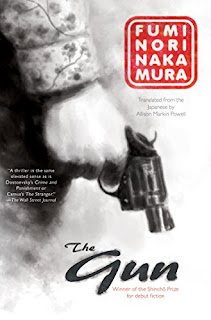 The Gun by Fuminori Nakamura

A brilliant debut novel about an isolated young student who comes across a gun on the banks of a river. This is a story about obsession, empowerment and ultimately violence and is set in a starkly noirish rendering of Japan. Nakamura's prose is succinct and functional yet deeply resonates. I've read a lot of Japanese fiction but The Gun was my first by Fuminori Nakamura, it won't be my last. 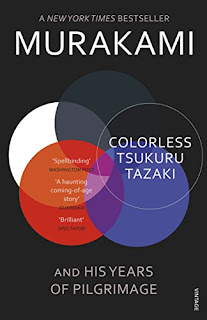 Colorless Tsukuru Tazaki and His Years of Pilgrimage

The central plot of this neat story is Tsukuru's search to understand why his four closest school friends suddenly, and without warning, give up all communication. Cue themes of rejection, loneliness and solitary reflection which run through so much Japanese fiction.

What's different here are the Murakami motifs which recur over and over; the soundtrack (in this case Liszt's 'Le Mal du Pays'), surreal dream sequences and characters with profoundly deep emotions. This is the perfect blend of the mundane and the mystical, the everyday and the enigmatic. 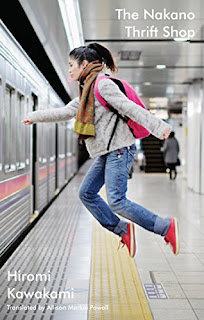 The Nagano Thrift Shop is a story about a young woman, Hitomi, who starts to work behind the counter in a traditional neighbourhood second-hand shop owned by the enigmatic Mr Nakano. The narrative is very much Hitomi's but the novel is structured with myriad characters who come and go along with the curios in the shop, each chapter is in fact named after a particular item on sale in the shop e.g. 'Bowl'.

I read the shop itself as a metaphor for an alternative Japan - this is a home for drifters and aesthetes rather than career men or women. The shop itself is in a residential neighbourhood, rather than a downtown business area like Shinjuku, which is interesting for readers of the translated version.