No book reviews this week I'm afraid thanks to the sheer weight and depth of Garth Risk Hallberg's City on Fire which I started last weekend and, at over 900 pages, can expect to be carrying around with me for some time yet!

Truth be told City on Fire is taking some time to get in to but the intimate relationship Hallberg obviously has with New York City is compelling and intriguing. I'm well over two thirds into the novel's intricate narrative which sees a number of plot themes converge around New Year's Eve in 1977. More next week, but in the meantime City on Fire has got me thinking; What is it about door-stop novels in 2015?

Readers of this blog will know that I devoured A Little Life by Hanya Yanagihara and The Bone Clocks by David Mitchell. Both come in at well over the length of a typical novel yet still leave you wanting more at the end.

Perhaps fans of epic TV box sets like Game of Thrones no longer feel daunted by extremely long format drama? Has the e-book given rise to the super size novel now that hand-bags and ruck sacks are liberated from the heft of the hardback?

Kindle is the obvious choice for reading novels of this size on the move or whilst waiting in a queue like me this week at The Royal Academy waiting for tickets for the Ai Weiwei show - great exhibition by the way and perfectly timed after reading Will Gompertz' Think Like An Artist.

Thank you to everyone who liked and shared my review last week of Merciless Gods by Christos Tsiolkas. Although this particular book is a niche genre I'm firmly of the view that the short fiction format is thriving at the moment. Just as well there are so many quality short story collections to read at the moment as I expect I'll be yearning for something more bite size after City on Fire!

"He ascended through Brutalist atriums and Byzantine stairways" 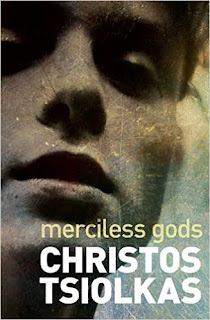 Discovered: I've been a Tsiolkas fan since The Slap

Where read: (in part) The wonderful Kioskafe in Paddington

Merciless Gods is a hard hitting collection of short stories from Christos Tsiolkas which comes off the back of recent critically successful novels The Slap and Barracuda. The stories shock from the off with pretty brutal portrayals of people dealing with family, betrayal and sacrifice.

I've read a number of cracking short story collections recently; Stuart Evers Your Father Sends His Love and Stay Up With Me by Tom Barbash spring to mind immediately. For me the format is perfect for reading on the go. Short, sharp bursts of engaging narrative can temporarily change your journey, your day and when in the hands of a great writer you entire week.

Christos Tsiolkas is well known for his no holds barred, explicit and raw writing style and this collection of short stories doesn't disappoint. Tsiolkas always write from a place he implicitly understands; gay, Australian, from immigrant parents, yet his ability to speak with different voices is remarkable.

City on Fire by Garth Risk Hallberg
at November 15, 2015 No comments: Links to this post 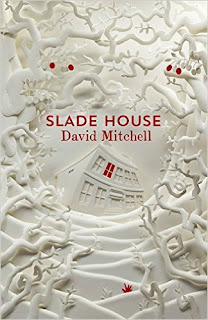 Discovered: I've been looking forward to this since the story was teased as part of Mitchell's Twitter fiction experiment last year.

Where read: (in part) The Coffee Works Project, Blackfriars Road

Slade House is set in the same world as The Bone Clocks but stands apart as its own story, a companion book if you like. Like Mitchell's other works Slade House features diverse voices from teenager Nathan in 1979 to an investigative journalist in 2015. The novel is based around the classic literary device of the haunted house but when given the fantasy time-bending David Mitchell treatment the end result is something unique.

David Mitchell never disappoints. Slade House is a short but dense tale that includes Mitchell's trademark multiple voices, intertwining destinies and time travel in a really accessible way. I have friends who have been put off by the sheer scale of The Bone Clocks but this novella is a great introduction to the horological themes in the main text. Banjax, psychovoltage, Engifteds - you'll soon get in to it!

The novella's structure is really simple; on Halloween every 9 years a small portal appears in the wall around Slade House which inevitably leads to somebody new discovering the house. Once inside the abductees' discover a missing person hostel, of sorts, preserved in amber. Fantasy meets pure gothic horror. Slade House is part detective investigation and part Doctor Who, Phantom Manor for grown-ups.

Merciless Gods by Christos Tsiolkas
at November 08, 2015 No comments: Links to this post 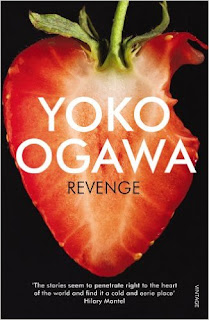 Where read: High speed train from St Pancras to Margate

What's the story?
As the title suggests Revenge is a collection of dark and macabre short stories from contemporary Japanese writer Yoko Ogawa. The stories are unconnected yet contain repeated themes and motifs that stem from the first story about a mother who buys cream cakes each year on the day of her dead son's birthday.
The Word's Shortlist view:
Much has been written about how dark and lonely these tales are but honestly, themes of loss and isolation are pretty standard in Japanese fiction! Like her contemporaries (Kawakami and Yosimoto) Ogawa's prose is brief and lean, there is absolutely zero room for hyperbole.

Pithy dialogue and minimal plot structure makes Revenge a neat and orderly read but don't be fooled, these eleven stories still manage to pack a punch. From a disused zoo to a museum of torture we're transported to a range of Gothic settings through the lens of Japanese modernity. Any why not? Much has already been written about the secrets that lie behind the neon lit streets of Japan's mega cities.

Revenge is a clever collection of stories inspired by contemporary Japanese writers as well as Edogawa Rampo (a thinly veiled Japanese interpretation of Edgar Allen Po) and the Mystery Writers of Japan. I'll be reading more of Ogawa's work in the future.

"Eternal truths are ultimately invisible, and you won't find them in material things or natural phenomena, or even in human emotions.” - Yoko Ogawa


Who should read this book?

Anyone who's enjoyed Murakami, Yoshimoto or Kawakami

Slade House by David Mitchell
at November 01, 2015 No comments: Links to this post