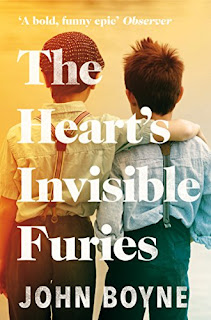 "A big story perhaps too big a story"

In The Heart's Invisible Furies John Boyne writes an epic multi-generational tale about relationships, about fate and about the indirect paths our lives lead. With themes including religion, family, class and sexuality this is hard hitting and emotionally complex stuff that Boyne weaves together effortlessly.

The novel begins and ends with Catherine Goggin who we initially meet as a pregnant 16 year old girl fleeing rural West Cork for Dublin having been told, by brutal and hypocritical priest Father James Monroe, that her chances of marriage are doomed forever. Though we follow Catherine through the rest of the book the story belongs to her son Cyril whom she gives up for adoption by a middle class couple in Dublin.

Over the next 50 years or so Boyne explores life through Cyril's eyes as a gay man in a country that evolves from ancient theocracy to the modern day referendum on gay marriage.

Dealing with sexuality and class is well trodden ground in literature which Boyne plays out in the comparison between parochial Dublin and metropolitan Amsterdam and New York but there are better versions of this paradox in books like The Buddha of Suburbia (1993). What Boyne brings to the table is a specific Irish context which is best articulated when Cyril unexpectedly moves back to Dublin from New York.

Despite the huge landscapes covered in the novel Boyne's prose is wonderfully tender and poignant in places; 'All I asked for was a sign, something to give me the courage to walk away, and you couldn't even do that!'.

Perhaps the trouble with the novel is that there is too much content. The chapters in Amsterdam could make a stand-alone novel of their own and seem over done if only to introduce the characters of Baastian and surrogate son Ignac.

This is a big story, perhaps too big a story, that could easily have been two. 3 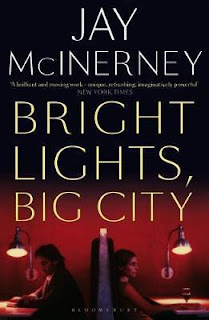 Bright Lights Big City was a sensation when first published in 1984. Jay McInerney’s name has forever been linked to a particular hedonistic New York lifestyle where cocaine, parties and dance clubs defined an era.

Reading some 30 years later the novel perfectly captures the mood of New York City at a time just before the AIDS crisis would fully take hold and before Bret Easton Ellis took the concept to the extreme in his depiction of professional psychopath Patrick Bateman in American Psycho (1991).

McInerney's pace is as frantic and desperate as the endless drug taking. In this version of New York the party goers live beneath a huge and swinging sword of Damocles; a precarious and unsustainable existence.

No review of Bright Lights Big City can ignore the elephant in the room, the second person narrative. This unusual narrative style has, no doubt, caused more notes in the margin than anything else. Who could argue that the second person doesn’t work in the opening line; “You're not the kind of guy who would be in a place like this at this time of the morning”, which immediately hooks the reader into the story. The only problem is sustaining the tone throughout the whole novel. Patrick Bateman's first person narrative in American Psycho ultimately carries more resonance. 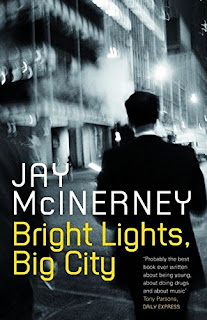 The Island by Ragnar Jonasson 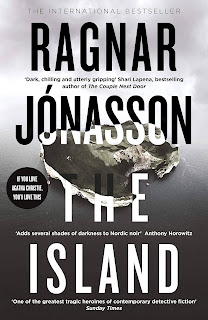 
Ragnar Jonasson’s first novel in the Hidden Iceland series, The Darkness, confirmed that the Icelandic winter is the perfect backdrop to pure Nordic Noir but in Book 2, The Island, Jonasson goes a step further to locate the action, in part at least, to an even more isolated setting.

Detective Inspector Hulda Hermannsdottir is back this time investigating a death amongst a small group of friends who had gathered to commemorate the murder of another friend 10 years earlier. Jonasson ramps up the tension with a great cast of suspects each with a foot (and a story) both today and in the past.

But it is Hulda who steals the show. As an experienced detective she is unrivaled and as a woman in her sixties she has the emotional intelligence to land at the nub of an issue quicker than everyone else. In The Island we continue to learn more about Hulda, this time following her attempt to connect with her father who had been a US soldier based in Iceland in the years after World War II.

The Island is a compelling and intelligent slice of Nordic Noir with the optimum amount of light and shade to appeal to both crime and literary fiction fans in equal measure. Jonasson makes crime fiction look easy, but painting by numbers this isn’t, pick up plenty of other Nordic Noir and you’ll realise just how good Ragnar Jonasson is.