Do Androids Dream of Electric Sheep? by Philip K. Dick 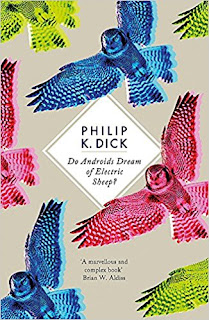 What's missing from the film adaptation?

The film adaptation of Philip K. Dick's Do Androids Dream of Electric Sheep (1968) is so embedded in contemporary culture that the novel now includes a sub-title 'The Inspiration behind Bladerunner and Bladerunner 2049'. With the 1982 film adaptation now back in the spotlight, thanks in part to Secret Cinema's current production, is there any reason to read the source novel?

Like many of the titles in Philip K. Dick's canon Do Androids Dream of Electric Sheep? is a slim novel that defies its 208 page count to create a vast and complex world packed full of questions around morality and what is is to be human. The film adaptation picks up on the key story line in which ex police detective Rick Deckard earns a living retiring rogue androids. The novel is set in a post-apocalyptic megacity on the West coast of America in the near future (1992 or 2021 dependant on which issue you are reading) following a global nuclear war. It is impossible to read the novel without thinking about the genre defining art direction in the Ridley Scott film but this only makes the novel richer.

What's missing from the film are the references to pre-colonial art, music and fiction (the pulp fiction and abstract art coming from mid 20th Century Earth prior to colonialisation of nearby planets). Pris, a basic 'pleasure model replicant' and one of the androids being hunted by Deckard,  speaks of the rare science fiction novels she coverts and attempts to critique the work of Edvard Munch. Whether androids dream of Electric sheep remains a mystery but it seems they read for pleasure and have the empathy to live vicariously though others.

Writing the novel in the Sixties Philip K. Dick was fully in command of the meta-narrative he was creating. Reading today, with AI becoming an intrinsic part of daily life,  makes you realise just how prescient his writing was. Do Androids Dream of Electric Sheep? is an accomplished novel is its own right and an even better companion to the film adaptations (and the immersive cinema experience currently playing in East London)